"A Piece of the Inner Earth" 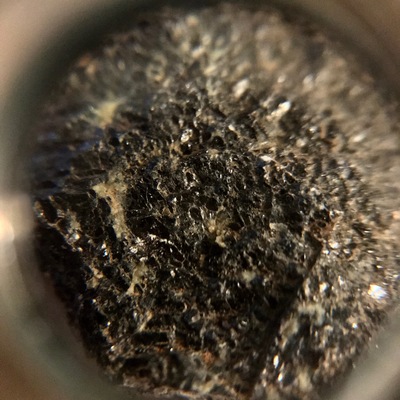 Here lies, a picture of a close examination of a rock sample, that is referred to as a "Chromite", by Geologists, because this rock contains and exhibits qualities and physical features that tell the story of a world that is well beneath humanity's feet, deep in the Earth's crust. But the true reason for this sample, is to hopefully locate Diamonds! If we are able to find Diamonds, then we can use them to explain not only where this rock came from but maybe how the Earth formed billions of years ago, and in turn how the many rock bodies of the Solar System formed as well. This is because "Chromites" are rocks that are formed under high pressure and temperature, but with the factors that manifest its creation. Its experiences and story are preserved within the minerals that make up the body of the rock. This story, awaits to be told, and I intend to be the one to tell the story!