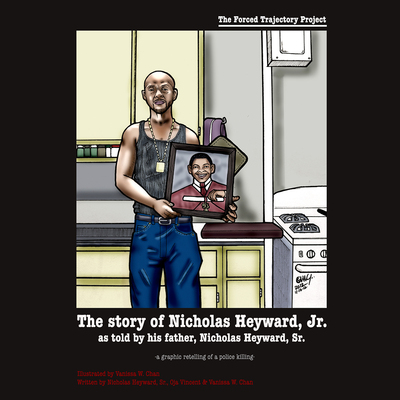 Forced Trajectory Project is a long-term multimedia project that began in 2009 documenting the rippling effects police violence has on communities beginning with the families who have lost their loved ones to police murder. Utilizing moving pictures, stills, illustration, and sound, the project’s goal is to paint an intimate and accurate portrait of the “forced trajectory” these family members find themselves on after their loved one is killed. The image is an illustration of Nicholas Heyward, Sr., holding a portrait of his 13-year old son, Nicholas Heyward, Jr., who was shot and killed by NYPD officer Brian George in 1994. The circumstances of the killing did not have anything to do with who Nicholas Jr. was or what he was doing, but how his race and economic status placed him in a housing community where volatile police interactions happen frequently. It is through stories like Nicholas Jr.'s that we can begin to understand the nature of policing in America.